For the last TEN weeks, our house has been under renovation.  What was supposed to be a quick and painless project turned into a long and tedious one that culminated last week in most of the contents of the house residing somewhere other than where they’re meant to be.

I had been prepared for a 6-week adventure of living and cooking out of our basement.  Six weeks, I figured, was nothing.  We could totally get by using 2 bar fridges, a chest freezer, a barbecue and an instant pot.  Six weeks, with the end of school, the start of summer, and all the activities that happen during that period, would fly by.

But as six weeks turned into ten, the project started to take a toll – at least on me, anyway.  My entire way of living was thrown for a loop.  Meals were consumed at odd times, composed of things that didn’t need to be cooked (no eggs), that took up little room in our compressed refrigerator space, or that could be prepared in about 5 minutes flat.  Daily visits to the gym were more often that not cancelled as I found myself running out to Lowes or Home Depot for emergency supplies, or simply waiting in my house for tradespeople to show up.  For someone who has such an entrenched routine (one that has been devised over the past few years to produce optimal vitality), and who craves consistency, predictability, and order, this past month has been nothing short of torture.

With that being said, the final aspects of the project should be completed on Friday, marking the end of this long cocooning period, with my new kitchen emerging out of the dust and debris like a beautiful butterfly.

Which means . . . I can go back to life as usual.  I can cook and eat the way I want to.  I can exercise when I want to.  And of course, I can putter around my house and my garden without having to look out for where the tradesmen might be working.

Sadly, over these last ten weeks, #the100dayproject has also been running.  And while I have been taking photos of the sky every day, for the last few weeks, I simply haven’t had the energy to post my photos and quotes.  As day after day went by without posting, the guilt grew over my inability to complete this project the way I had intended to 100 days ago.

Taking a page from Emily Ley’s Book, Grace Not Perfection, I decided to cut myself some slack, relax, and and be content that I at least managed to take a sky photo every day, even if they weren’t all posted.

And as I was contemplating all this, while I stepped out tonight to take my 100th photo, I found a very fitting sky . . . 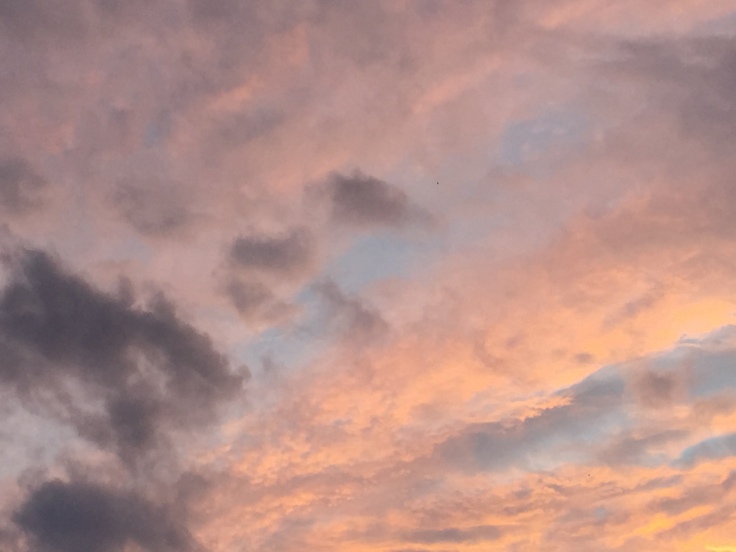 An absolutely stunning show of a sunset . . . with . . . a few dark clouds rolling through for good measure.  Proving once again, that nothing’s perfect.  And that perhaps the sunset was made even more beautiful by the start contrast with the dark storm clouds.

So, with that wonderfully, metaphorical photo, I will once again be bringing my 100 Day Project to an end.

However, with my new kitchen, renewed time now that I’m not dealing with the multitude of issues that arise from any sort of renovation project, and the bevy of wonderful things that summer brings, I will once again get back to sharing stories and adventures, and workouts and recipes, and other assorted good things with you.