This week has been HOT!  And HUMID!  Which has made working out HOT!  And SWEATY!

While we were treated to a few moments of gorgeousness while the sun rose, dark clouds were pushing in on the horizon, bringing with them the promise of rain.  And so, I decided to get up, and get going, and get running. 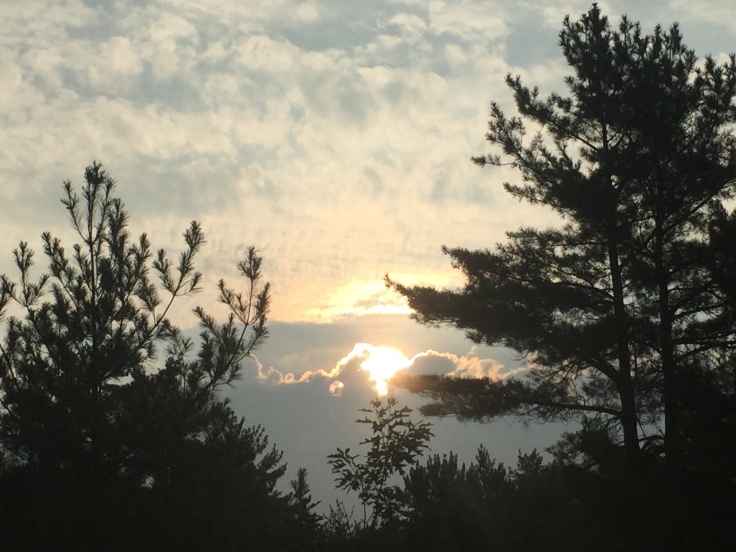 Two minutes into my run, I was swarmed by bugs . . . big black ones . . . flying around my head . . . landing on my already sweaty limbs . . . attempting to bite me.  I ran for a few more minutes, alternating between trying to out-run the bugs, and wildly flailing my arms trying to shoo them away.  And still they stuck with me.  It was at this point that the doubts started creeping in . . . maybe I should turn back. . . maybe it’s too hot to be doing this anyway . . . what if i swallow one of these bugs . . . what if I end up with a million bites?

And I came dangerously close to just quitting . . . Until my rational mind shouted louder than my monkey mind . . . and I remembered how good I would feel when it was all over, how much I love the feeling of working out, and that despite the bugs, there was a lot to enjoy on my run . . . and my persistence was rewarded with a stunning view at the 1/2 way point in my run . . . and a lovely cool swim with my mom, not the kids, on my return.  Oh, and the best part . . . I set a personal best time for the run, finishing it a whole minute faster than I did last week!

In the event you’re wondering, my workout on Monday was this:

2km run to open then:

And on Tuesday, I did a modified version of a friend’s workout (she just might be superwoman as her version had double the number of reps that I did, and even doing just half the workout nearly killed me!)

2km run to open then five rounds of:

And last night, I did a great, SHORT yoga class on Yoga Download.  You can watch the class on line, or through the podcast app on your phone (which is what I did).  It’s a great class in that it hits all the major muscle groups, in fairly quick succession, so you get a great all-over stretch!

Later this afternoon, I had the distinct pleasure of spending time in the kitchen with my son playing the part of my sous-chef.  We were in charge of whipping up a meal that, as this part of our stay up north comes to an end, involved singing up the odds and sods we had left in the fridge and the freezer.  We decided on making coconut rice (again!) and served it with a stir-fry of mixed bell peppers, bok choy that had been sautéed in olive oil with garlic and scallions, pan fried pork cutlets that had been sliced into strips, and shrimp sauteed in olive oil, ginger and scallions.  Our idea was that you could put the rice down on the plate, add on whatever you’d like, and pour some sauce on top (recipe for the sauce to follow).  I had a truly lovely time cooking with him.  He was capable enough to handle cooking the peppers and pork on his own.  He was an eager taste-tester of everything we made – including the slightly spicy sauce.  And he was engaged in learning how to make the things he hadn’t cooked before – like bok choy.

And in the end . . . it was a pretty good dinner.  And the upside, the fridge and freezer are almost empty!  Just in time for us to fill them up next week!