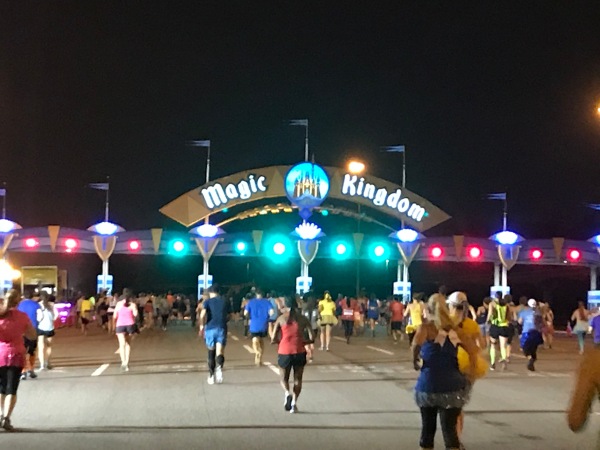 It’s no secret – I LOVE runDisney races!  There are a million reasons why the Disney runs are so magical – the amazing community of runners in the races, the on-course entertainment, and all the fun and excitement surrounding the races just to name a few.  And there are a million other runDisney fanatics that share my view – there’s SO much you can read and SO many communities you can join online focused on Disney runs.

But that being said, before I hit the starting line for my first runDisney event, even after all the reading and researching and community-joining that I had done, I still had loads of questions running through my mind.  And so, as the runDisney race season starts up again for the new year, I thought I’d make a little list of things I wish I had known before my first race to maybe help any other newbies to the runDisney community at large before their first race! 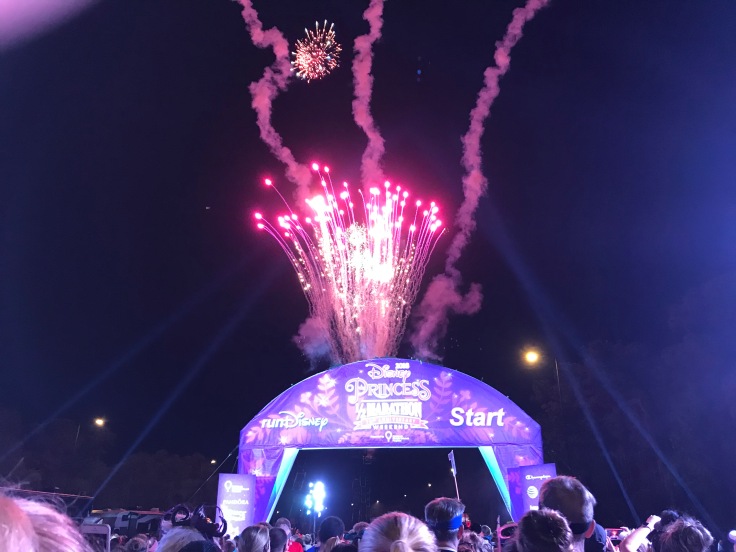 1. You DON’T have to wear a costume

I’ll never forget getting to my corral for my first ever run and seeing all the amazing costumes and feeling totally and completely underdressed!  (I mean one woman was fully decked out in a crocodile costume – and she still ran faster than me!)

I’ve also learned that there’s a happy medium too . . . a fun tank from vendors at the the run expo, like Raw Threads, or a cute skirt from Sparkle Skirts or Sparkle Athletic make for a fantastic and comfortable running outfit.  Add in a big bow or cute headband – like the ones at Sparkly Soul to complete your “costume” (I still don’t know how people run in Mickey/Minnie ears – so I’m partial to a big bow I can clip in on top of my ponytail that I know will stay put for the whole race).

2. Stop to Take Photos Along the Way – and Have YOUR Photo Taken (and don’t be alarmed if some of the photos aren’t the most flattering) – and Splurge and get PhotoPass

One of the fun parts about Disney races is that you get to see “behind the scenes” as it were of some of the parks.  AND you get to see loads of characters that aren’t always out and about in the parks.  So stop and take photos – these are often the photos my family (the kids) like best.

And while we’re on the topic of photos, don’t forget to stop and have photos taken of yourself too.  While there are often long lines for the character photo-ops along the course, it can still be fun to stop and pose with your favourite Disney friend – the wait can be a nice way to take a break from all the running.  However, there are also tons of photographers along the course who snap away at all the runners that pass them by.  Don’t forget to smile or wave as you pass by them.  But don’t be alarmed if these aren’t the most glamorous shots you’ll ever see of yourself.

I know it’s not exactly cheap – but if you can swing it – splurge and get the PhotoPass.  It will allow you to download ALL your photos from the race(s) you do for free, not to mention any other photos you take while you’re on Disney property.  Trust me, you’re going to end up wanting to buy ALL your photos anyway. – and when you see the cost of a single photo download, you’ll be SUPER happy you bought the PhotoPass. 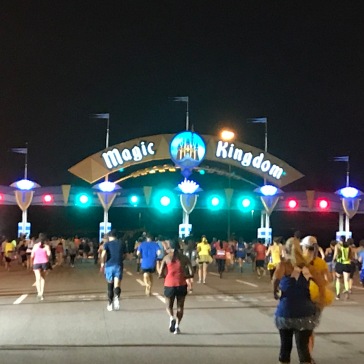 So used to driving under this sign . . . NOT running under it! 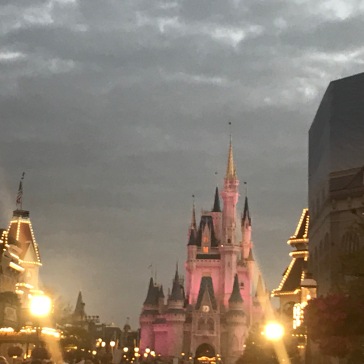 My favourite view of all happens when you run down Main Street.

Best photo op of the entire Princess Half! 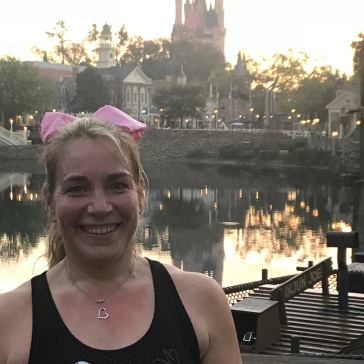 My running buddy and I HAD to stop to take photos here!

3. Don’t Worry about Personal Bests at a Disney Run

Those who know me know that I can be just a tad bit competitive.  So the idea of running a race for “fun” and not to try and earn a personal best just doesn’t see right to me.  BUT, Disney is NOT the place to try for personal bests.  Why???  Well, there’s so much to take in while you’re running, it’s nice to actually take it all in, instead of focusing on running as fast as you can.  And as I mentioned above (see 2. Stop to Take Photos Along the Way – and Have YOUR Photo Taken) – it’s hard to run your best race if you’re slowing down to take photos or to have your photo taken!

But, it’s also important to keep in mind that since the races go THROUGH the parks, at times the race course gets quite narrow.  Which means everyone has to slow down to make it through the tight spots – case in point – during the Princess Half, everyone gets to run trough the castle . . .not exactly the widest thoroughfare!  So, even if you have the best of intentions, you may find yourself running into some unexpected magical obstacles that prevent you from getting that personal best.

4. Get to the Race Early – and Be Prepared to Walk a LONG Way to Get to Your Corral

I know – the runDinsey events start an an ungodly hour of the morning.  And when you factor in travel time, and the time it takes to get to your corral, chances are, you’re going to be waking up somewhere close to 3:30 or 4 in the morning on race day.

I’ll be honest, I was prepared to wake up early, to leave my hotel early, and to get to the race early.  And I did.

But what I hadn’t factored into my plan was the (seemingly) never-ending walk to get to the corrals and the sheer amount of time it took to get there.

On reflection, the walk to the corral was a nice warm-up, and since the walk there took so long, I didn’t end up waiting for ages in my corral.  But, it also meant that I wasn’t at the front of the corral either (which is super important for some runners).  So take that into consideration when you’re setting up your wake-up and departure times for race morning!

While there are ample portable washrooms around the courses, the BEST advice my friend and veteran runDisney runner gave me was . . . . use the restrooms in the park!  During last year’s Princess Half, we ran into the bathrooms at the entrance to the Magic Kingdom.  Let’s just say it was a MUCH more pleasant experience than having to use the portable washrooms . . .

6. The VIP Race Retreat is Worth Every Penny

I signed up for the Race Retreat before last year’s Princess Half.  I had previously signed up for it at the Disneyland Tinkerbell Half Marathon weekend – and the ability to access the merchandise area there early was a godsend.  For the Princess Half, though, I was motivated to sign up for it because I had signed the Husband and my kids up for the Platinum ChEAR Squad package (so they could be entertained and comfortable while waiting for me to finish the race) and I wanted to be able to join them in the tent after.

I will say though, it was very nice after the race to be able to grab a drink and a snack, and have a place to sit down and re-group before getting on with the rest of the day.

And . . . the characters onsite were pretty neat too!

7. Take Your Own Music

I know, I know.  RunDisney says not to use earphones while running in their races so you can hear course announcements as you’re running.  Which totally makes sense.  Except for the fact that large parts of the longer runs take place on the highway – yup – long stretches of pretty boring scenery – with little to keep you entertained other than then character sightings and checking out other runners’ costumes.

So, my runDisney buddy and I decided to run with just one earbud in – that way we could listen to the music we wanted to hear / needed to hear to keep us motivated – but we were also able to hear any course announcements – and of course to chat with each other!

8. Track Your Distance on Your Phone / Watch

While there are mile markers along the way for most of the races, during the Disneyland Tinkerbell 10k, there was only one 5k marker along the way.  I had neglected to set any sort of distance tracker on my phone/watch for that race, so I had NO idea, once I was past the half way mark, how much further I had to run.

That being said, even with all the mile markers along the runs, it is nice, between miles, to know just how far you need have let to go to get to the next one – especially in the later part of the race!

9. Be Prepared for the Weather

Running in Florida can mean running through all different kids of weather – and it’s best to be prepared for any eventuality!

Obviously that means planning for high temperatures as well as the cooler temperatures that can hit, especially for the races in January and February.  (Layers are your friend – and all the layers you discard along the way get donated to local charities.)

But it also means planning for the temperature changes WHILE you’re running the race.  Even though the races start off in the dark, by the time you’re done running, hopefully the sun will be shining, and you may wish you had a hat or sunglasses to shade your eyes from the sun!

And of course, it means planning for chafing and blistering.  I honestly never thought chafing would be a concern of mine . . . but heed the warnings you’ll see from veteran racers – use the anti-chafing product that you like best.  You’ll be glad you did.  And as for blisters – I found that double layer socks worked wonders in my shoes!  I can run for miles without a single foot issue!

That being said, if you do happen to have a chafing or blistering issue along the run, there are lots of first aid stations along the way to help!

10. Spend Some Time Post-Race in the Parks WITH Your New Medal(s)

It’s true – the best way to recover after a long run is to walk – and what better way to get in a slow, leisurely recovery walk, than to walk around the park wearing your new hardware.  Don’t forget to get lots of pictures of you wearing your medals (to make the MOST of your PhotoPass+ purchase) and lots of pics of your medals in front of your favourite Disney landmarks (like the Castle).

Oh, and eat ALL the food while you’re walking the parks too . . . post-race calories don’t count, so have that churro, get that popcorn, savour that Mickey ice cream.  You deserve it!

Well, that’s all the tips I have for now.  I hope to see you out on a runDisney race course soon – and I hope you love all your runDisney events just as much as I do!