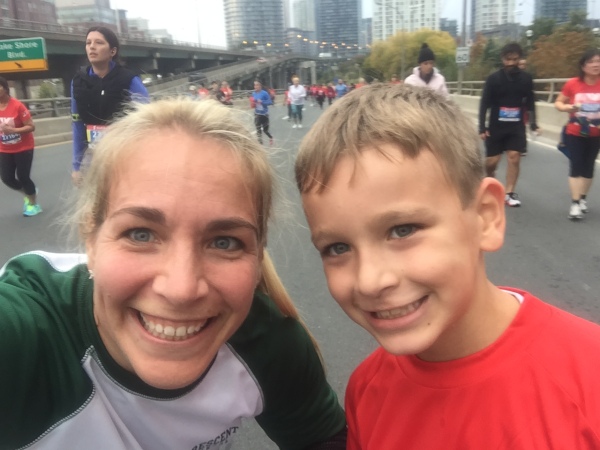 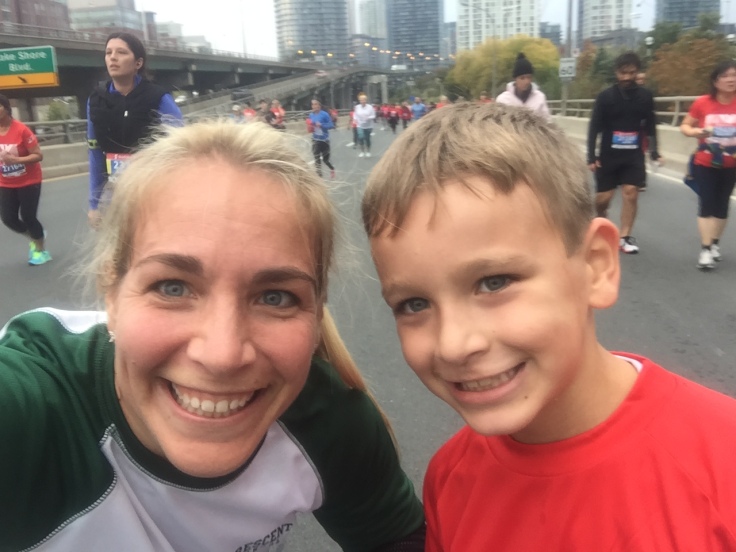 Yesterday I ran the Scotiabank Marathon Jr with my son – a 5k race that was part of the larger Scotiabank Waterfront Marathon.  The opportunity to do this came through my son’s school – all fall, as part of their cross country program, the boys have been recording the distances they have run, with the idea being that by the time they had finished they would have run a total distance equal to that of a full marathon.

Let me preface this by saying that I am not a natural runner.  My running technique is suspect at best (I’ve been compared to a kangaroo when I run . . . and that’s not a good thing), and running long distances have never been my forte.

But something about this challenge captivated my son, and he was extremely keen to get out and “practice” his running.  So as we’ve been out running over the past few weeks, racking up kilometres for school and for our Hogwarts Running Club medal, we’ve both had a chance to improve on our running.

I mentioned in my last post about running with my son, how I loved that he talked to me throughout our runs, and the kinds of things he would share with me as we ran.

But yesterday, as we ran what was the first official running race for both of us, I found a lot more to love, and I learned a few lessons along the way too.

I loved the gentleness in my voice as I encouraged us both along the course.  Phrases like “you’re doing great” and “look how well we’ve done so far” were offered often, and were truly heartfelt.

Reflecting on all of this made me think – what if I faced my challenges in life with excitement and enthusiasm?  What if worked better on pacing myself, not in the gym, but in life – slowing down when I need to, but also picking up the pace when I can?  What if I was gentler with myself, and truly accepted the encouragement that’s given to me?  Wouldn’t life feel so much better if we lived a little more like that???

I’d be remiss, though, if I didn’t mention what might be my MOST favourite part of the race yesterday – seeing my son’s face light up when he saw that he could have Gatorade at the water station (“Really mom, I can have Gatorade???”).  And his excitement when he got to just toss the empty cup on the street – apparently he threw it just like Bautista . . . 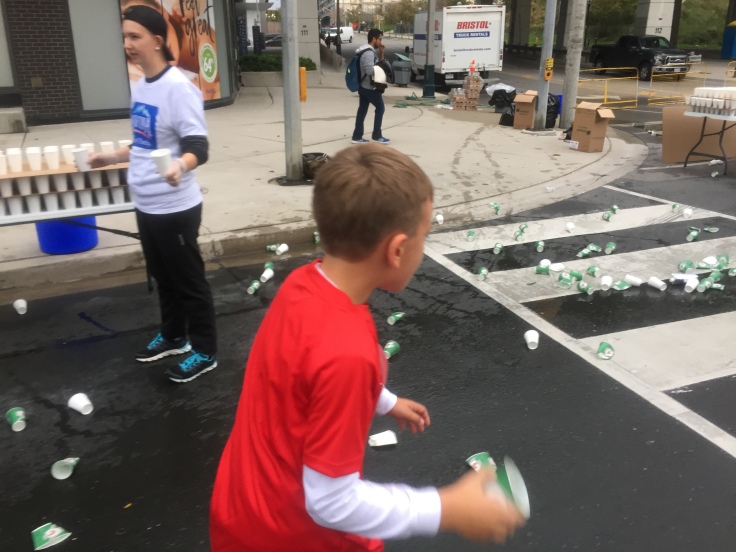 And now I can’t wait until we can do our next race together . . . and maybe even get the little one involved too! 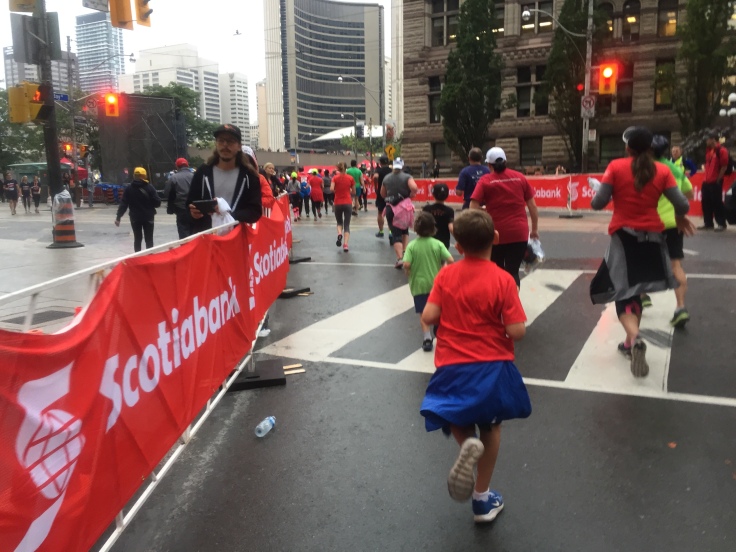 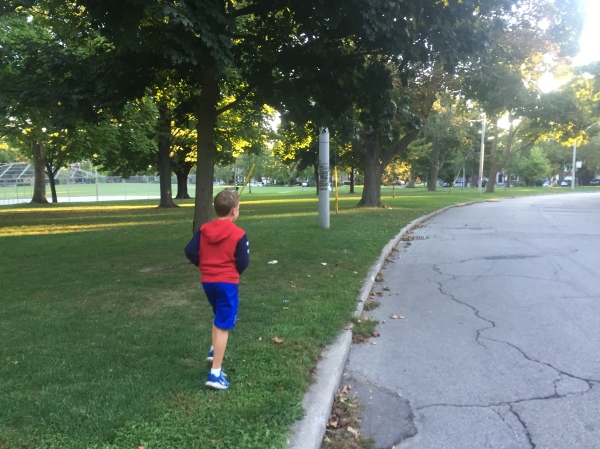 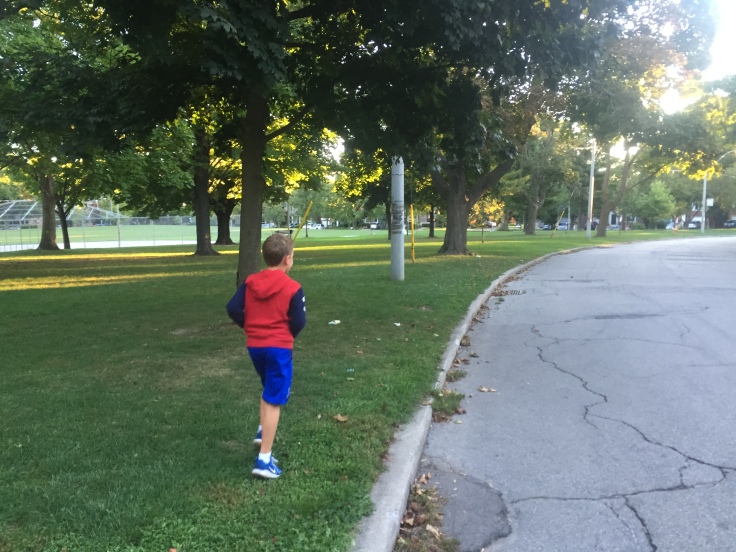 My older one is involved with his school’s cross country team this fall.  All summer he’d been curious about running, and would often ask if I could take him to practice his running so that he could get faster.  So his interest in cross country this fall isn’t exactly surprising.

What is surprising (in the best possible way), is that the boys on his cross country team get to participate in the 5km run as part of the Toronto Marathon next month, AND as part of their training, each boy has a goal of aggregating 37km of running during course of their training so that when they’re done the 5km at the marathon, they will have run a full marathon over the course of their season.

And the BEST part about all of this . . . well, clearly it’s that I’ve gained a running partner.  This morning was our first run together.  We did a solid 2km at a decent pace (I let him set the pace, and worked on technique as I had a bit – not much – of a slower pace than normal).  And while he could use this run towards his total kms for school, I’ve looked up a few virtual runs that would be fun for us to do together, and came across this,  The Hogwarts Running Club.  This month has been shaping to be a Harry Potter kind of month . . . we’re reading the first book together, we’re going to have a movie night and watch the first movie as a family when we’re done reading the book . . . and now we can do a run together and earn a Harry Potter medal!

But on a serious note, this morning’s run was one of my favourite moments as a parent yet.  Running may not be your thing, but try going for even just a walk with your kids.  It’s amazing what they will share with you, when you’re one on one with no other distractions, and how connected you may end up feeling by the time you walk through your front door.