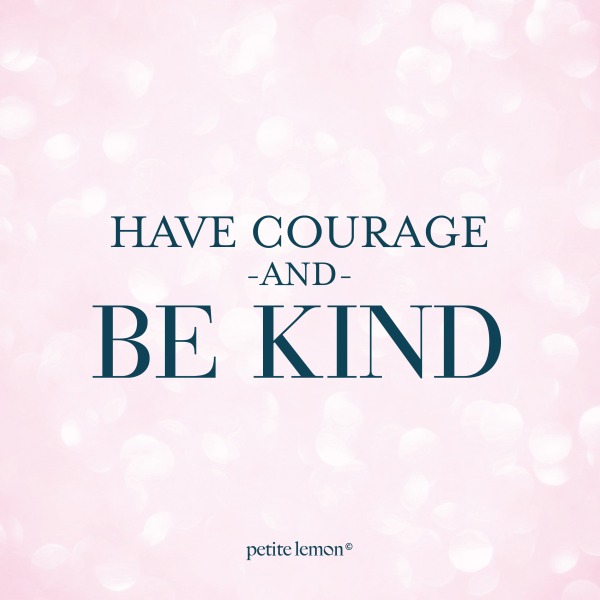 Everything has been going so well this week, and with the Husband out for a work dinner on Wednesday night, I decided to do something a little crazy, and let the kids stay up a little later than normal and watch a movie with me.

Specifically, I let them stay up to watch the live-action version of Cinderella.  We had been reading about the cartoon version of Cinderella that morning (Salvador Dali inspired Cinderella’s pink dress in that movie, and Dior was the inspiration for her blue ball gown.  Who knew!).  And I thought it would be fun to see the movie “come to life”.

For those of you that aren’t as familiar with Cinderella in any of it’s forms (and by that I mean for those of you without little girls under the age of 5 in your house!), on her deathbed, Cinderella’s mother tells her to “Have courage and be kind”.  And so, despite the horrific treatment she is subjected to by her stepmother and stepsisters, Cinderella tries to remain kind to them and bravely does whatever is asked of her.  In this new movie, this line is repeated several times throughout the movie; which is perhaps why it made such an impression on me.

Whatever issue you might have with the story of Cinderella, I think this is a pretty powerful message.  Think of the people you most admire in your life . . . I’m going to bet one of the first things you’ll say about them is how amazingly kind they are; and that that sentiment will likely be followed by how they have faced some sort of trial with a tremendous amount of courage.  I know that I can say with certainty that the people that have had the most impact on my life have been both amazingly kind even in the face of some pretty horrible circumstances.

And so, it’s likely I’ll be printing this out later and hanging it up in my office (although that might require another trip to Michael’s. . .).  And if you have a spare moment, check out the site I got it from, Petite Lemon, she’s got some amazing printable stuff!! 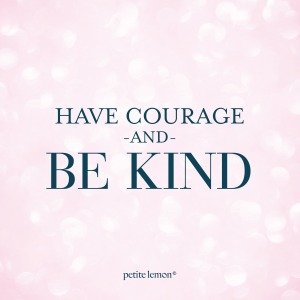 In my own VERY tongue in cheek way, I got to practice this tonight, as this was the first of our weekly “kids choose the dinner” dinners.  I gave the older one a cookbook last week and told him he could pick anything he wanted out of it to make for dinner (as I had pre-selected the cookbook, I knew it couldn’t be anything too removed from what we normally eat for dinner).  Shockingly, (and I say that with a heavy dose of sarcasm), he chose to make burgers.  Specifically, we made Martha Stewart’s Best Beef Burgers.  They were good; kids ate them, they have next to no ingredients, and the kids LOVED mixing the meat and forming it into patties.  In case you’re wondering – I thought myself quite courageous for letting them get in there and mix the meat themselves and kind for remaining perfectly calm when little bits of beef ended up scattered around the kitchen counter, floor, kids…

And yes, we did ALL end up eating these with buns . . . with a side of roasted corn on the cob and kale chips. 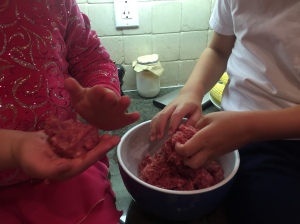